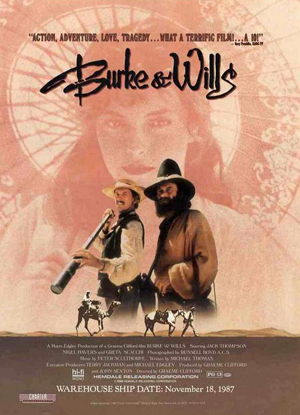 Based on a true story, this film tells the tale of Robert O'Hara Burke (Jack Thompson) and William John Wills (Nigel Havers), who in 1860 set forth to create the first accurate maps of the interior region of the Australian continent. To this end, Irish explorer Burke and British scientist Wills journeyed from the southern coast of Carpenteria to the North. While they succeeded with the first part of their voyage, on the return trip they and their compatriots fell victim to intense heat and diminishing supplies of food; of the 19 men who began the expedition, only one survived to tell the tale. However, while fate was cruel to Burke and Wills, history was kind, and their story is still taught in every Australian classroom. Graeme Clifford's biopic was praised for its striking visuals and realistic portrayal of Burke and Wills' difficult journey.

Beautiful Australia. This is the story of two men William O'Hara Burke (Irish) and John William Wills (English) it follows them as they cross the continent of Australia. These two men went down in Australian history as being the first two to cross the continent. There is also a tragic element to the story as the two men died on the way back to Melbourne. This film makes excellent use of Australia both its landscapes and actors. Jack Thompson puts in an excellent performance as Burke and English actor Nigel Havers is good as Wills. Greta Scacchi is also in the film and is very good. With stunning cinematography excellent acting and attention to historical detail this film is surely one of the best Australia has ever produced.

Interesting re-enactment ... but a little too disjointed and overlong. Thompson is good as the feisty Irish Burke, and Havers tries his best as the quiet English Wills, but it is the stunning location scenery which helps this one along. Disappointingly, we never get a "feel" for the characters: the lack of close up shots in particular gives this one a distant quality as the viewer remains largely alienated from the inner workings of Burke's raving mind. The film is somewhat historically inaccurate (the explorers never did see the actual Gulf), and this can usually be overlooked in such a production, but the director has made the mistake of slipping into "re-enactment" mode instead of just telling a story that has become part of Australian folklore - and the length doesn't help when everyone who knows anything already knows how the film is going to end.

The doomed Burke-and-Wills expedition of 1860 is the stuff of Australian schoolboy legend. A party of four men crossed the forbidding interior desert of the subcontinent from Melbourne on the southern coast to the Gulf of Carpenteria in the north, but on the return journey, the party succumbed to the heat and lack of food, and only one survivor made it back to tell the tale. Robert O'Hara Burke (Jack Thompson), a fiery Irishman, is the leader of the party. With him is Englishman William John Wills (Nigel Havers), along to do scientific work, and 19 other men. With its conclusion already familiar, the film has some trouble maintaining a dramatic center. The landscapes are vacant and haunting, and the whole film has superior production values, but the frequently confusing structure detracts. The performances, though, are right on target. Director Graeme Clifford obviously made the film for audiences in Australia , where these men are still remembered as heroes.

Two hours and twenty minutes may not seem excessive for a 3,700-mile trek across an untracked Australia, yet you may find yourself fidgeting in the course of the new Australian movie based on that adventure. Despite Russell Boyd's stunning photography and a big, burly, bushy-bearded performance by Jack Thompson as Burke, leader of the 19th-century expedition, ''Burke and Wills,'' which opens today at Cinema 1, runs short of plot even before the explorers run short of water.

Robert O'Hara Burke and William John Wills set out ''to conquer the country'' on Aug. 20, 1860, along with 17 other men plus horses, camels and supplies. As re-created by Michael Thomas's screenplay, Burke is a forceful, impetuous and fatally wrongheaded leader. Wills, played somewhat diffidently by Nigel Travers, is more reflective, much more the English gent, and no match for Burke when it comes to taking command. Unfortunately, after setting up their potentially clashing personalities, the story settles for tepid disagreement and bouts of good fellowship. The most emotional moment in the movie is the death of Burke's horse. Greta Scacchi, as a singer who keeps telling Burke how much she adores him, can't compete.

Another piece of the plot has to do with the expedition's prosperous organizers who hold back desperately needed help. Here, the director, Graeme Clifford, seems to be encouraging obvious performances, presenting the upper strata of Melbourne as Victorian caricatures in order to rub in the falseness of civilized life.

Out in authentic nature, by contrast, the heroes are more human, except perhaps for that fellow who keeps his jacket buttoned and his cravat tied even on the hottest days. We know the days are hot, because excerpts from Wills's diary tell us periodically of temperatures above 100 degrees (and no shade). It's like tuning into an all-weather radio station. The climax gets more exciting, with near misses between survivors and rescuers, but that is followed by a stagy ending that refuses to end.

The most evocative element of ''Burke and Wills'' are the tribesmen, who move like shadows along the expedition's way, part of the land that the white men have set out to exploit. The observation of a young soldier that the country is, after all, the black man's, seems a gesture to present-day sensibilities, yet each time the natives appear, in the often surprising editing of Tim Wellburn, the movie sounds a deeper note.

Except for a couple of diversions -a cricket game in the wilderness, a chorus of ''Hark the Herald Angels Sing'' to celebrate Christmas in the desert - it's a hard and not unfamiliar journey, particularly on the way back for the four men who make it to the gulf. Lots of sun and not enough water or food and too many rats and lizards and bursts of craziness on the cruel sands. ''Thirsty work!'' as somebody says. Oops, there goes another camel.