The Fourth Burke & Wills Conference
was held at the
Royal Society of Victoria, Melbourne
1st - 4th May 2009.

Conference Theme: Towards the 150th Anniversary of The Burke & Wills Expedition 1860-61

The Fourth Burke and Wills Conference was held in the heart of Melbourne between Friday 1st and Monday 4th May 2009 at the Royal Society of Victoria building at 9 La Trobe Street, Melbourne 3000. The Royal Society of Victoria is the only Royal Society with its own premises and this historic building is celebrating its 150th Anniversary this year. It is a very significant place, as it is the spot where the expedition assembled prior to departure and also where the remains of Burke and Wills were laid in state prior to Victoria's first state funeral. 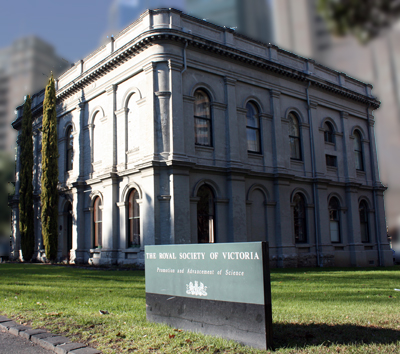 The conference program consisted of a variety of excursions and visits over four days between Friday 1st and Monday 4th May. The Conference presentations were on Saturday 2nd and Sunday 3rd May and there was a dinner on the evening of Friday 1st May.

Conferences are organised by
THE BURKE & WILLS HISTORICAL SOCIETY (Inc.)