1862
A tribute to the memory: The fate of the explorers, Sydney: W T Baker. 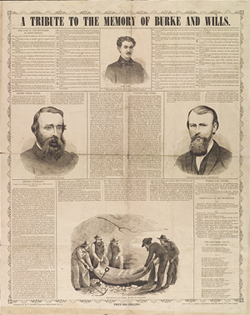 View original broadsheet at the NLA

Set your face toward the darkness -- tell of deserts weird and wide,
Where unshaken woods are huddled, and low, languid waters glide;
Turn and tell of deserts lonely, lying pathless, deep and vast,
Where in utter silence ever Time seems slowly breathing past --
Silence only broken when the sun is flecked with cloudy bars,
Or when tropic squalls come hurtling underneath the sultry stars!
Deserts thorny, hot and thirsty, where the feet of men are strange,
And eternal Nature sleeps in solitudes which know no change.

Weakened with their lengthened labours, past long plains of stone and sand,
Down those trackless wilds they wandered, travellers from a far-off land,
Seeking now to join their brothers, struggling on with faltering feet,
For a glorious work was finished, and a noble task complete.

And they dreamt of welcome faces -- dreamt that soon unto their ears
Friendly greetings would be thronging, with a nation's well-earned cheers;
Since their courage never failed them, but with high, unflinching soul
Each was pressing forward, hoping, trusting all should reach the goal.

Though he rallied in the morning, long before the close of day
He had sunk, the worn-out hero, fainting, dying by the way!
But with Death he wrestled hardly; three times rising from the sod,
Yet a little further onward o'er the weary waste he trod.

Facing Fate with heart undaunted, still the chief would totter on
Till the evening closed about him -- till the strength to move was gone;
Then he penned his latest writings, and, before his life was spent,
Gave the records to his comrade -- gave the watch he said was lent --
Gave them with his last commandments, charging him that night to stay
And to let him lie unburied when the soul had passed away.

Through that night he uttered little, rambling were the words he spoke:
And he turned and died in silence, when the tardy morning broke.
Many memories come together whilst in sight of death we dwell,
Much of sweet and sad reflection through the weary mind must well.
As those long hours glided past him, till the east with light was fraught,
Who may know the mournful secret -- who can tell us what he thought?

Very lone and very wretched was the brave man left behind,
Wandering over leagues of waste-land, seeking, hoping help to find;
Sleeping in deserted wurleys, fearful many nightfalls through
Lest unfriendly hands should rob him of his hoard of wild nardoo.

Ere he reached their old encampment -- ere the well-known spot was gained,
Something nerved him -- something whispered that his other chief remained.
So he searched for food to give him, trusting they might both survive
Till the aid so long expected from the cities should arrive;

So he searched for food and took it to the gunyah where he found
Silence broken by his footfalls -- death and darkness on the ground.

Weak and wearied with his journey, there the lone survivor stooped,
And the disappointment bowed him and his heart with sadness drooped,
And he rose and raked a hollow with his wasted, feeble hands,
Where he took and hid the hero, in the rushes and the sands;

But he, like a brother, laid him out of reach of wind and rain,
And for many days he sojourned near him on that wild-faced plain;
Whilst he stayed beside the ruin, whilst he lingered with the dead,
Oh! he must have sat in shadow, gloomy as the tears he shed.

Where our noble Burke was lying -- where his sad companion stood,
Came the natives of the forest -- came the wild men of the wood;
Down they looked, and saw the stranger -- he who there in quiet slept --
Down they knelt, and o'er the chieftain bitterly they moaned and wept:
Bitterly they mourned to see him all uncovered to the blast --
All uncovered to the tempest as it wailed and whistled past;
And they shrouded him with bushes, so in death that he might lie,
Like a warrior of their nation, sheltered from the stormy sky.

Ye must rise and sing their praises, O ye bards with souls of fire,
For the people's voice shall echo through the wailings of your lyre;
And we'll welcome back their comrade, though our eyes with tears be blind
At the thoughts of promise perished, and the shadow left behind;
Now the leaves are bleaching round them -- now the gales above them glide,
But the end was all accomplished, and their fame is far and wide.

Though this fadeless glory cannot hide a grateful nation's grief,
And their laurels have been blended with the gloomy cypress leaf.
Let them rest where they have laboured! but, my country, mourn and moan;
We must build with human sorrow grander monuments than stone.

Let them rest, for oh! remember, that in long hereafter time
Sons of Science oft shall wander o'er that solitary clime!
Cities bright shall rise about it, Age and Beauty there shall stray,
And the fathers of the people, pointing to the graves, shall say:
'Here they fell, the glorious martyrs! when these plains were woodlands deep;
Here a friend, a brother, laid them; here the wild men came to weep.'