and welcome to BURKE & WILLS WEB
the digital research archive of expedition records.

The Burke and Wills Expedition was originally called the Victorian Exploring Expedition and its aim was to cross the continent of Australia from Melbourne on the south coast to the north coast, which at the time was uninhabited by the migaloo (white-fella). No one had done this before, and to the Victorian colonists the centre of the continent was unknown, unmapped and unexplored.

The expedition was organised by the Royal Society of Victoria and it became the first to cross the continent. Three men traveled 5,000 kilometres from Melbourne to the shores of the Gulf of Carpentaria and then back to the Depot Camp at Cooper Creek. Seven men died in the attempt, including the leader, Robert O'Hara Burke and the third in command William John Wills. Only one of the four men who reached the north coast, John King, survived to return to Melbourne. 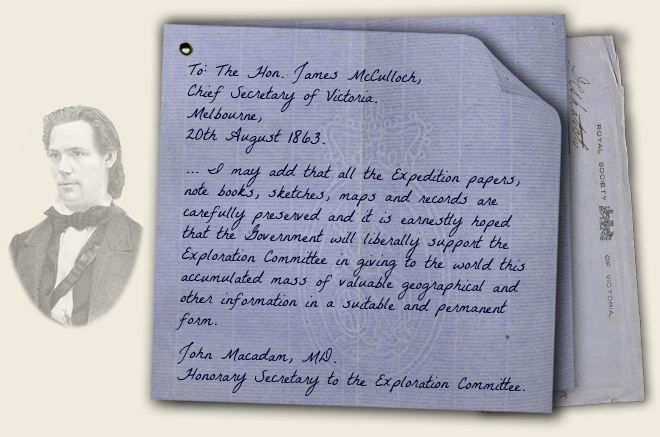 Macadam's wishes were not fulfilled. Many of the records were lost and the surviving ones have become overshadowed by the huge amount of popular literature that has been published. Now, 158 years after the expedition, Burke & Wills Web is the realisation of that dream. This website is an historic research resource which provides digital access to the primary archive sources, that 'accumulated mass of valuable geographical information' that Macadam referred to.