The Victorian Exploring Expedition had around 20 tonnes of stores, and they wouldn't all fit on the three wagons that the Royal Society of Victoria had built for the expedition. Landells didn't want to load the camels up at this early stage; he wanted them fresh for the desert stages later in the expedition. In order to move the mountain of stores, Burke hired an additional three wagons in Melbourne intending to use them only as far as Swan Hill. The weather was wet and cold and the roads were very bad and consequently the VEE struggled to make its way out of Melbourne.

Three days out from Royal Park, Ludwig Becker noted in his journal :

The next day, Becker noted how difficult it was for the camels, usually accustomed to travel over desert sands, to walk on boggy ground : 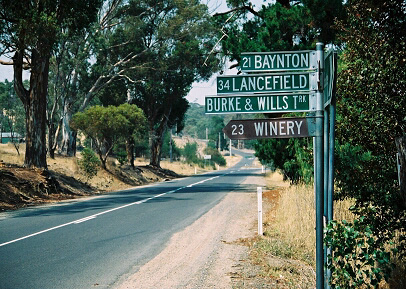 The hired wagons found the going so difficult, they were left behind to make their own way and they didn't catch up with the main party until Swan Hill, some 20 days after leaving Melbourne.

After travelling via Lancefield, over the great dividing range at what is now called "The Burke and Wills Track" the party halted for a rest day at Mia Mia, and sightseers from Heathcote and Bendigo came to see the camels

The party found more favourable weather as they crossed the Terrick Terrick plains north of Bendigo, but once again the rain became torrential as they approached the Kerang crossing of the Loddon and they were forced to take a rest day at Tragowel, where the hospitality of the owners, Booth and Holloway was much appreciated. Becker wrote :

Burke continued to alter his personnel, losing one of the sepoys two days out from Melbourne, hiring a cook at Mia Mia, hiring a bushman with exploring experience at Tragowel on the Loddon and dismissing four men in Swan Hill. After reducing the strength of the party, Burke then hired four additional men in Swan Hill, including Charley Gray, a sailor who was working as an ostler at the Lower Murray Inn.