Several Relief Expeditions were mounted during 1861-2 and these found traces of the Burke and Wills Expedition.

Alfred Howitt found the bodies of Burke and Wills and discovered the sole survivor, John King. He dug up their note-books and maps at the Dig Tree and returned them to Melbourne. He marked and mapped Wills' grave, Burke's grave and the Dig Tree, as well as identifying several of Burke's camps between Menindee and the Cooper.

John McKinlay also visited the graves of Burke and Wills and added his blaze to that of Howitts at Burke's grave. He also discovered a body he believed to be that of Charley Gray at Lake Massacre.

Frederick Walker discovered traces of the Expedition at the Flinders River and located the most northerly camp, Camp 119. He blazed a tree here and mapped the site.

Retracing the Expedition since 1862

There have been a number of attempts to retrace the explorers' tracks since the expedition crossed the country in 1860-1861.

McGillivray, 1870-1
On 23 December 1870, George McGillivray left Eddington Station near Julia Creek on horseback and travelled via the Diamantina River, Cooper Creek and Strzelecki Creek to Beltana and then Wilcannia on the Darling River. This trip is often (incorrectly) credited with being a retracing of Burke's route.

Morrison, 1882-3
On 19 December 1882, George Ernest Morrison ('Chinese Morrison' or 'Peking Morrison') left Normanton and walked to Melbourne, arriving on 21 April 1883. His story of the walk, which he described as 'no feat of endurance - only a pleasant excursion' was published in The [Melbourne] Age and [Melbourne] Leader. Although Morrison was sometimes 400 kilometres east of Burke's route, recently his trip has been reported as 'retracing Burke and Wills' route'.

Towner, 1947-1965
Queensland grazier, Alfred Cory Towner (1901-1965) of Blackall, Queensland spent considerable time retracing the expedition, starting in 1947. Although his diary and notes have never been published, he marked the track by erecting a number of signs and memorial markers. Towner blazed a tree in the bed of Cooper Creek at the place he believed Wills had died and subsequently Mike Steel, Joe Mack and Eric Loffler placed a memorial cairn at the site. Towner also erected a sign at Lake Massacre close to where he believed Charley Gray had died.

Bergin-McHugh, 1977
In 1977 Tom Bergin and Paddy McHugh took camels from Cooper Creek to the Gulf of Carpentaria to establish if travel during the summer months had proved detrimental to Burke's progress. ABC TV made a documentary and Bergin produced two books about the expedition.

Army Aviation Base - Birdsville to Innamincka, 1989.

Collier, 1983
In 1983 Roger Collier and the Lake Massacre Expedition identified a tree near Towner's sign which they believed marked Gray's Grave. David Corke disputes this site and believes Gray was buried further to the west near Amagoorannie. The site is heritage listed on the Register of the National Estate. In 2006 it was proposed to remove heritage listing and Roger Collier succesfully petitioned the DEH (SA) to keep the site protected.

Corke - Preshil, 1980s
During the 1980s David Corke and students and teachers from Preshil School identified a number of blazes marking Burke's camps from the Cooper to the Diamantina. Corke also replotted the site of Wills' death and an additional memorial cairn was erected by Joe Mack at the revised location.

Tangey, 1985
In 1995 Chris Tangey discovered artifacts which could have been deposited by Wills on the return from the Gulf at Camp 32R.

Hillan, 2000
In 2000 David Hillan surveyed the area to the north of Camp 119 and identified the most northerly point Burke reached. In addition, Hillan erected a marker at Burke's most northerly camp (Camp 120) and relocated Frederick Walker's camp of January 1862.

Corke, Fischer, Walker, 2001
In 2001 Richard Cork rediscovered the sandstone cave where Burke, Wills, Gray and King sheltered from wet season storms on their return from the Gulf of Carpentaria.

Leahy / Holmes, 2007
In 2007 Professor Frank Leahy published a paper in Spatial Science outlining the search for Return Camp 46, the Plant Camp.' Dr Ray Holmes announced the discovery of artefacts in the area and in 2008 the area was protected by Heritage Listing.

Phoenix, 2008 - Burke & Wills Walk
In 2008 Dave Phoenix walked 3,752 kilometres across Australia from Melbourne to the Gulf of Carpentaria retracing the Expedition. 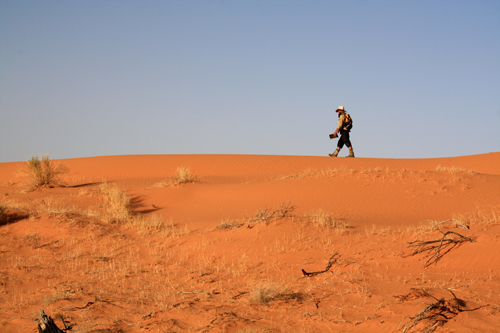 Currently several members of the Burke and Wills Historical Society are actively pursuing field studies relating to the track of the expedition.