Alfred William Howitt was their eldest surviving son. He was educated in England, Heidelberg, Germany, and University College, London. Arriving in Victoria with his father and brother on 13 September 1852 he went to the diggings and had some success. When his father returned to England in 1854 Howitt farmed land near Melbourne belonging to his uncle, Dr Godfrey Howitt. Five years later he became leader of an expedition sent out to look for pastoral country near Lake Eyre, South Australia, but found drought conditions wherever he went. On his return he took a position as manager of a station near Hamilton, but almost at once was asked to take charge of a party organized by the government to prospect for gold in Gippsland. The magnificent timber he passed through aroused his interest in the eucalypts, and he afterwards acquired an extraordinary knowledge of them both from the scientific and practical points of view. His expedition followed up the Mitchell river and its tributaries, and gold was discovered on the Crooked, Dargo, and Wentworth rivers.

On returning to Melbourne Howitt found there was great anxiety about the fate of the Burke and Wills expedition, which a year before had started to cross the continent. A relief expedition was organized with Howitt as leader which started from Melbourne on 4 July 1861, but meeting the remnant of Burke's expedition at Swan Hill, came back for instructions. A fresh start was made in September, and Howitt returned on 28 November bringing the survivor King who had been living with the natives. All the members of his party were in good health and not a single horse or camel had been lost. A fortnight later Howitt again left for the interior to bring back the remains of the lost explorers. The opportunity was taken to do some exploring near Cooper's Creek. There had been recent rains and the country was in quite different condition from when Howitt had seen it two years before. He began to take an interest in the aborigines, and though he had no difficulty in finding a way of living with the Dieri tribe, some of the back country natives gave him much anxiety. He at first spoke of them as "an idle incorrigibly treacherous, lying race--I can well understand the feeling of bitter enmity which always subsists between the outside settlers and the native tribes". Larger experience later on enabled him to better appreciate the native side of the case. He returned to Melbourne with the remains of the explorers in December 1862.

In 1863 Howitt was appointed police magistrate and warden of the goldfields in Gippsland, and held that position for more than a quarter of a century. He was at first stationed at Omeo then completely in the wilds. In 1866 he removed to Bairnsdale and remained there until 1879 when he was moved to Sale. For some time he was police magistrate for the whole of Gippsland, which he traversed from end to end carrying on his work competently together with his various scientific studies. Already an authority on the timber in his district, he began his studies in petrography in 1873. His first geological paper "Notes on the Geology of part of the Mitchell River Division of the Gippsland Mining District" appeared in the progress report of the geological survey of Victoria for the year 1874. Other geological papers were afterwards published in the Transactions of the Royal Society of Victoria, of the Australasian Association for the Advancement of Science, the Quarterly Journal of the Geological Society, and the Reports of the Victorian Department of Mines. His interest in the aborigines led to his study of the Kurnai tribe which was still in existence in Gippsland. He gained their confidence and was treated as though he were an initiated member of the tribe. In 1873 he got into communication with the Rev. Lorimer Fison, whom he had casually met many years before. They formed a great friendship and worked together for many years. Of their Kamilaroi and Kurnai (1880) Baldwin Spencer said "it laid the foundation of the scientific study of the Australian aborigines, for it was in this work that, for the first time, we had given to us a detailed, accurate account of the social organization of Australian tribes" (The Victorian Naturalists, April, 1908).

In 1889 Howitt was appointed secretary for mines, and returned to Melbourne. He was still continuing his scientific studies. A long series of valuable papers by Howitt and Fison on the Australian tribes began to appear in The Journal of the Anthropological Institute of Great Britain and Ireland in 1883, and continued to come out at intervals until 1907. Among Howitt's other scientific papers his treatise on "The Eucalypti of Gippsland", which appeared in the Transactions of the Royal Society of Victoria in 1889, may be especially mentioned. In 1896 Howitt was appointed audit commissioner and a member of the public service board. He continued his scientific work and did not retire from the public service until 1901 when he was past 70 years of age. He settled at Metung in Gippsland and hoped to consolidate his work in Australian ethnology, but found that his services were still required by the state. He was made chairman of a royal commission on the coalfields of Victoria, and subsequently spent much time as a member of the interstate commission considering proposed sites for the future Commonwealth capital. He was awarded the Mueller medal by the Australasian Association for the Advancement of Science in 1903, and in 1904, having completed his book The Native Tribes of South-east Australia, he paid a visit to England to see it through the press. It was hailed as "an anthropological classic, the standard authority on the subject with which it deals". He attended the meeting of the British association and read a paper on "Group Marriage in Australian Tribes", and the university of Cambridge conferred on him the honorary degree of doctor of science. He returned to Australia to take up again his botanical and petrological studies, and was awarded the Clarke memorial medal by the Royal Society of New South Wales. In 1906 the honour of C.M.G. was conferred on him, and he was made president of the Australasian Association for the Advancement of Science at the meeting held in Adelaide in 1907. Towards the end of that year he had a severe illness and died at Bairnsdale on 7 March 1908. He married Maria, daughter of Mr Justice Boothby of Adelaide. His book on the native tribes is dedicated to her memory. He was survived by two sons and three daughters. One of his daughters, Mary E. B. Howitt, assisted him in his anthropological work. Howitt's mineralogical collection was left to Melbourne university, his botanical collection to the national herbarium, and his scientific library to Queen's College, Melbourne.

Physically Howitt was below medium height and of spare frame. Brisk, alert and full of energy, he scarcely seemed to know fatigue even as an old man, and was insatiable in his desire for knowledge. As he lay dying, he dictated a message to anthropologists warning them of the necessity for caution in accepting information from Australian aborigines who had been living in contact with white men. When he died it was scarcely realized in his own country how great a man had passed away. To his fellow scientists he was the man whose knowledge of the eucalypts rivalled that of Baron von Mueller, and whose work with Fison on the aborigines had laid the foundations of anthropology in Australia. As a geologist he stood almost alone in Victoria. His knowledge had all been developed in the spare time of a busy public official.

To the public of Victoria he was known as the man who rescued the remnant of the Burke and Wills expedition, and to those who had the privilege of knowing him personally this was merely an episode in the life of a man of simple and noble character, whose one aim was a ceaseless and tireless search for truth.
Sir W. Baldwin Spencer, The Victorian Naturalist, April 1908.

Information from the Dictionary of Australia Biography by Percival Serle, Angus & Robertson, 1949.
http://gutenberg.net.au/dictbiog/0-dict-biogHi-hu.html#howitt1 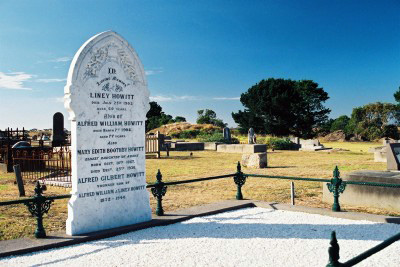