On the tracks of Burke and Wills 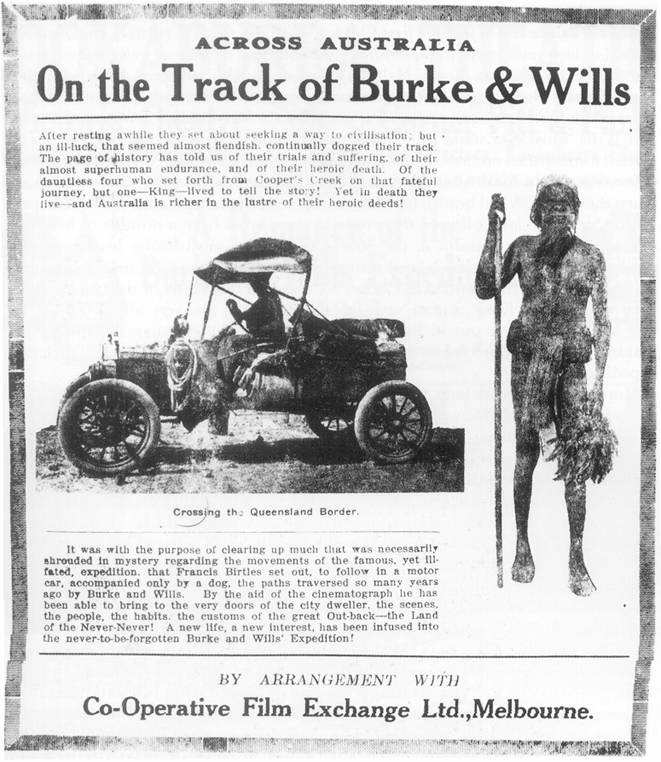 On 21 September 1912 Birtles with his brother Clive and bulldog 'Wowser' left Melbourne in a blue 20hp Ford Flanders touring car to drive to Sydney, Brisbane, Charters Towers and then the Gulf of Carpentaria. He suggested he might then go on to Port Darwin or returning to Melbourne via Burke and Wills' track, but from the Gulf he drove closer to the Northern territory border than Burke's track, and he arrived back in Melbourne in January 1913.

On Saturday, 13 February 1915 he left Sydney for a six month long motoring tour following Burke and Wills' track. Unnacompanied this time, except for his bulldog, Birtles, he reached Broken Hill on 25 February and Adelaide on 1 March. He remained in Adelaide for two weeks to recover from an illness and then went via Burra, Port Augusta, Quorn and Maree to Cooper Creek. He reached Boulia in May, Gilliat in June and Normanton on Saturday, 5 June 1915. He then returned to Melbourne via Cape York, Einasleigh, Hughenden, Tambo, Roma, Toowoomba and Brisbane, arriving in Melbourne at the end of September 1915 having covered 7,000 miles in seven months. Birtles took a movie camera and made a cinematographic record of the journey. He then drove from Melbourne to Swan Hill and Menindee to finish the movie of the Burke and Wills' track.

The film was called 'Across Australia: In the Tracks of Burke and Wills' and was released by The Co-Operative Film Exchange Ltd of Melbourne. It opened in Melbourne at Hoyt's Olympia Theatre on Christmas Day 1915.

Birtles revisited Cooper Creek several times, including a visit to the Dig Tree in December 1928 with his dog Yowie. Birtles' photograph of the tree was published in several papers in 1933.

Images of Birtles' motoring trips at the National Library of Australia.