The men were exhausted but looking forward to the glory of being reunited with the Depot Party and having a decent meal. Burke not only expected to find the four men he left at the Depot under the charge of William Brahe, but also all the men he left in Menindee under the charge of William Wright. Burke lead the triumphant party into the Depot, calling back to King that he could see the tents in the evening twilight. They staggered in to the Depot only to find it deserted - there was nobody there. Burke said the Depot must have been moved to a better spot on the creek, but then they saw a fresh blaze on a tree next to the stockade. The blaze instructed the men to DIG, which they did. They found a camel box with provisions and a note left by William Brahe. It read: 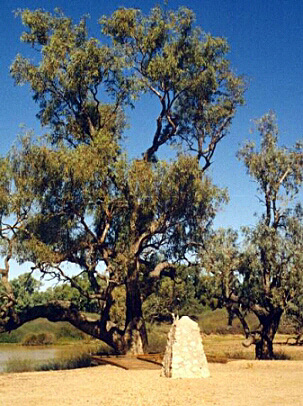 The tree with the "DIG" blaze became known as the Dig Tree in the 1930's after the publication of Frank Clune's novel Dig. Even the contents of the blaze itself have been the subject of conjecture over the years, there is debate whether the blaze contained the words

John White published an account of this historical confusion in Burke and Wills: The stockade and the tree, (Footscray, Victoria University of Technology Library, 1992).

Burke read the note left behind by Brahe and realised Brahe had left that very day. Burke asked Wills and King if they felt able to follow Brahe that evening but as they were barely able to crawl to the creek to get a billy of water, travelling further that day was out of the question. Burke weighed up his options and debated what to do.