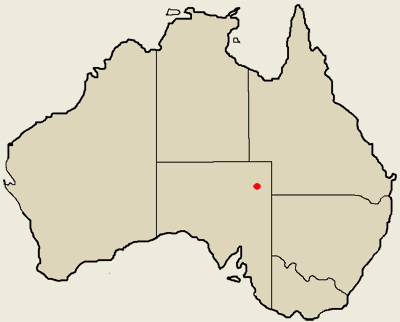 Charley Gray died on the morning of Wednesday, 17 April 1861. Burke, Wills and King spent the day digging out a shallow grave before continuing on to the Cooper. This was Camp 58R on the return from the Gulf.

Wills did not record the exact location, having planted all his surveying instruments on the 4 April 1861 and as a result there has been much conjecture over the actual site of Gray's death.

McKinlay visited a place called Kadhi-baerri on Sunday, 20 October 1861 and found a corpse he believed was European. Thinking the entire party had been killed by Aborigines, McKinlay gave the place the European name of Lake Massacre. King did not give any detailed description of the place other than to describe it as a lignum lake, but when questioned at the Commission of Enquiry he believed the body McKinlay found fitted the description of Gray. Howitt never visited the grave, but thought from the description the body might be one of Bleasley's Party. He later decided it must be Gray. Even the South Australian Governor, Sir Richard Graves MacDonnell, expressed doubt that the body had been Gray.

Threadgill (1922) was unconvinced that the body was that of Gray. Larcombe published a series of articles in 1926 and 1935 regarding the fate of Leichhardt and he too cast doubt on the validity of the claims.

The first detailed look at whether the body at Lake Massacre was that of Charley Gray was done in 1939 by Morphett, Parker and Sommerville. Their detailed investigation concluded that Lake Massacre must have been one of Burke's northbound camps that they revisited when returning from the Gulf.

In 1943 Hambridge also published a paper which concluded that Lake McNamara had been shown as Lake Massacre on some maps and had been connected with an incident involving Mr Wylie of Coongy Station and an altercation with the local Yandruwandha. He shows that the northern lake was the one McKinlay visited.

Lake Massacre Expeditions.
Captain Charles Sturt explored to the west of Lake Massacre on his first trip northwards from Depot Glen in August and September 1844, and passed well to the east of Lake Massacre on his second trip northwards in October November 1844, so it appears Hack and McDonald were the first Europeans in the area in 1858 or 1859. If Burke and Wills did pass this way on the return journey, they were the second group of Europeans. McKinlay's party was the third.

In 1937 ? there was an expedition into the Simpson Desert to look for signs of Leichhardt, Mr H V Foy visited Lake Massacre as part of this expedition.

In 1948 Alfred Cory Towner visited Lake Massacre and erected a sign within 60 metres of McKinlay's blazed tree. There are no records to show whether he found the tree and grave.

In 1982 the Duke of Edinburgh's award scheme organized an expedition to Lake Massacre, but failed to find any blazed trees.

In 1983 Roger Collier organized the Lake Massacre Expedition, which relocated the burial tree that McKinlay blazed. Collier was convinced he had found Gray's grave.

In 1986 David Corke did the first of a series of investigations in order to locate some of the expedition's northbound campsites in order to establish Burke's route and he found a place on Cooper Creek which he believed was Camp 67. His next expedition was with sixteen students and parents from Preshil School Camping Club in 1988. The Camp 69 Expedition camped on Tirrawarra Waterhole and identified locations they believed represented Camps 69, 70 and 71 on Cooper Creek as well as Camp 73 on the Diamantina River. The second Preshil Expedition in 1991, the Beyond the Cooper Expedition, found a location on Cooper Creek which they believed was Camp 68 and they also searched around a polygonum swamp for a possible grave site for Charley Gray.

McKinlay's journal at Lake Massacre
On 12 September 1861 , McKinlay was on Badnoota Plain, east of Wilpena Pound when police sergeant James Howe from Blanchewater rode up with news from Aboriginals near Lake Hope . Howe told McKinlay,

McKinlay was not convinced, believing this to be an idle rumour, but he went to check out the area anyway. He arrived at Blanchewater a week later and on the 24 September 1861 departed for the interior with a party that consisted of McKinlay, Hodgkinson as second in command, John Davis, Thomas Middleton, William Bell, Paul Wylde, Robert Poole, Edward Palmer, John Kirby and two Aboriginals, Frank (AKA Peter) and Jack.

McKinlay established a depot at Wantula and on 18 October 1861, left the depot to continue the search. With him he took Hodgkinson, Middleton and Bulingari, four camels, three horses, 160 lb of flour, 32 lb of sugar, 11 lb of bacon, 4 lb of tea and some rum (Lockwood, 1995). On the way they came upon a much better site for a depot, and McKinlay sent back for the main party.

McKinlay arrived at Kadhi-baerri at 14.20 on Sunday, 20 October 1861, where he found a crude grave. McKinlay waited for the camels to catch up and they rear of the party arrived around 17.00. That night McKinlay and Hodgkinson searched the immediate area of the grave and found an old flattened pint pot.

The next morning, McKinlay went around the lake looking for Aborigines. None were found and he went to open the grave.

McKinlay searched around on the 22 October, and although he found five Aborigines, he found no more traces of the Expedition. He blazed a tree near the grave at Lake Massacre :

where he buried a memo for any other search party. The memo read :