In 1857, Dr David Wilkie of The Philosophical Institute of Victoria suggested that the Institute send an Exploration Party across Australia. The Institute considered this proposal and although not in a financial position to run an expedition themselves, they established an Exploration Committee of 32 members to consider the proposal. This committee consisted of important members of the Victorian scientific community, merchants, doctors, ministers, professors and members of the Legislative Assembly including Sir William Stawell, Chief Justice of Victoria. The Melbourne German scientific community was also well represented on the Exploration Committee.

The committee met regularly at the Mechanic's Institute on Collins Street, Melbourne and discussed a range of proposals for exploration including sending a party by boat to the north coast of Western Australia to travel overland to Victoria or employing A C Gregory to lead a small, light party to explore the interior from the River Darling.

At the same time, Dr Thomas Embling, Member for Collingwood believed that camels could be used to explore the desert and he lobbied the Victorian Parliament to purchase camels. Up until that time, only a few camels had been imported and John Horrocks had been the only explorer to use camels in exploration. Unfortunately, Horrocks did not find any new or exciting land, but in 1846 he did become the only explorer to be shot and killed by his camel. Nine dromedaries had been imported from the Canary Islands and Horrocks used the last surviving camel, a bad tempered beast called Harry, to explore around Lake Torrens and the head of the Spencer Gulf. At Lake Dutton, Horrocks decided to shoot a bird, but whilst screwing the ramrod into the gun :

Horrocks made his way back to Penwortham Station near Clare, where a doctor was summoned from Adelaide. However the doctor was unable to treat the infection and on 23rd September 1846, twenty-three days after being shot by the ill-tempered Harry, Horrocks died without a struggle. Angry station hands shot Harry, but not before he had bitten an Aboriginal stockman on the head. 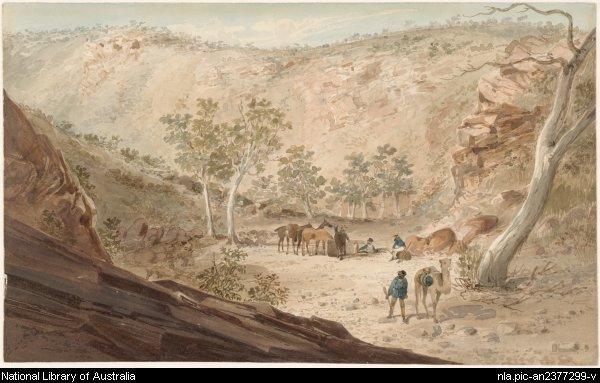 Camp in desert, Sept. 1st [1845] by Samuel Thomas Gill, 1818-1880.
Painted from sketches made during the Horrocks expedition.
Image © National Library of Australia