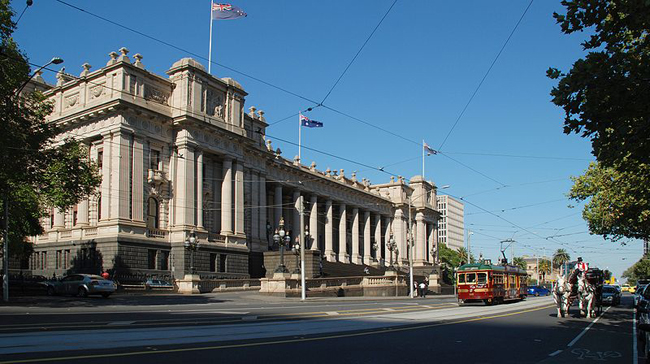 The Port Phillip District was declared in 1836 and governed by the New South Wales government in Sydney. In 1850 a Government Act was passed in London which formed the colonies of South Australia, Queensland and Victoria.

Victoria officially became a separate colony on 1 July 1851 and on 13 November 1851 the first Legislative Council of Victoria met at St Patrick's Hall in Bourke Street, now the site now of the Law Institute of Victoria. The first ministry was appointed in November 1855 by Governor Hotham. This ministry was led by William Haines and the first elections were held in 1856. Colonial parliamentarians were usually identified as following one of three political value systems: conservative; liberal; radical/democrat. These beliefs were not strongly held or discussed. Rather they were broad descriptions. Within these broad belief systems, members would group together into factions to achieve specific political goals.

Where no counsel is, the people fall; but in the multitude of counsellors there is safety
Vestibule Inscription, Parliament House, Melbourne